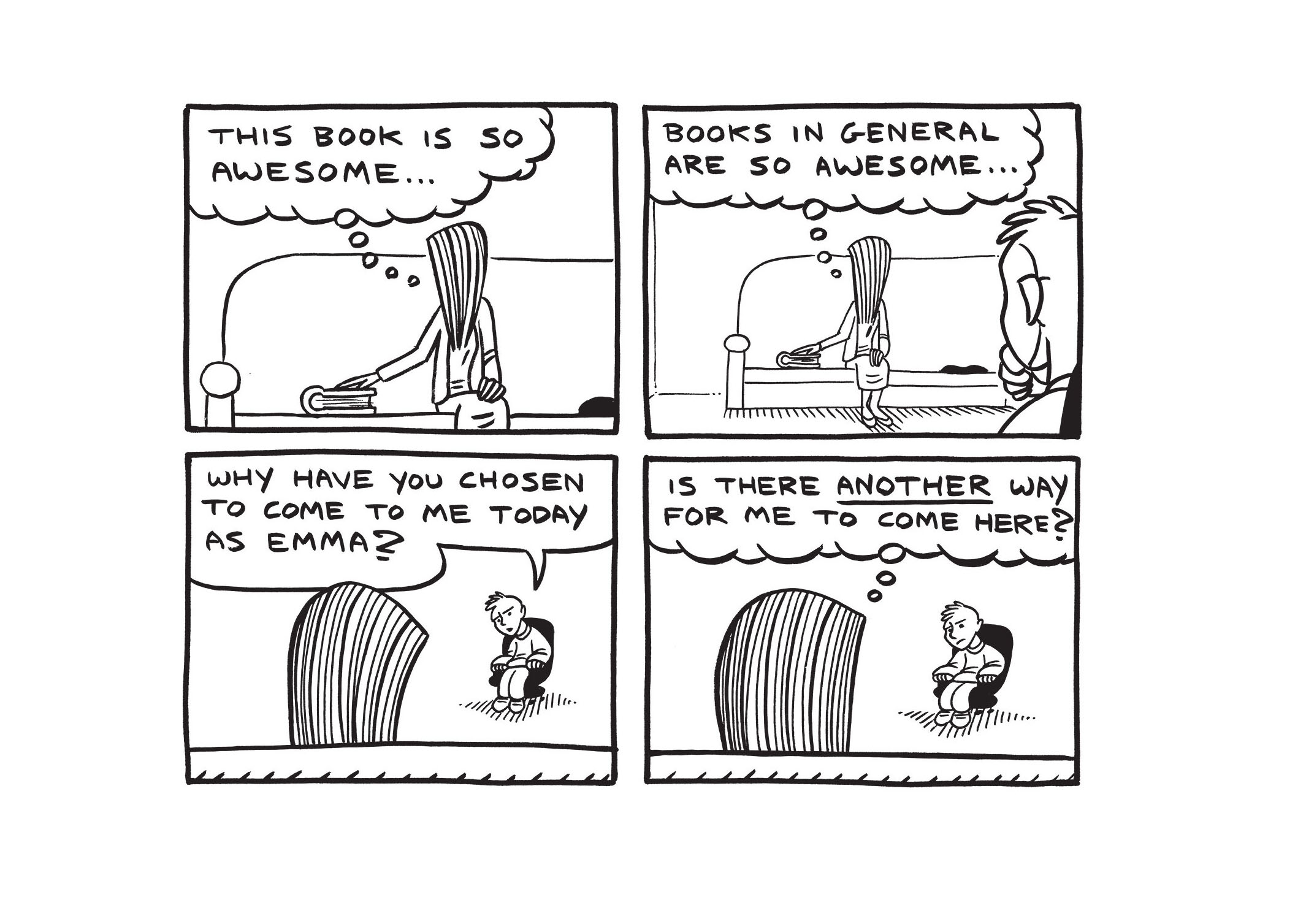 Emma Grove featured in them.

Emma Grove’s debut book, a graphic memoir titled The Third Person, is a profoundly moving and intimate portrayal of a life in pieces made whole.

The 49-year-old trans author, who started drawing before she could write, was inspired early in her life by Disney cartoons and trained to become a traditional animator, only to watch 3D animation take over the industry. About four years ago, emboldened by authors like Alison Bechdel and Jennifer Finney Boylan, Grove began working on a memoir that was supposed to be about her transition. Instead, she found herself circling back, again and again, to a period of a few months that she couldn’t remember — until she began to literally sketch it out.

The Third Person covers far more than just that period of time, but its focus is on the six months during which Grove was seeing a therapist, a trans man called “Toby” in the book, in the hopes of getting approval for hormone therapy. Much of the book takes place in a single room, therapist and patient sitting across from one another, trying to make the relationship work despite misunderstandings, and no shortage of bad behavior on Toby’s part. With thick, spare lines, Grove beautifully captures expressions, body language, and her own bafflement as she tries to understand why Toby won’t approve her for the hormones she desperately needs to live as herself.

What Toby was seeing, however, wasn’t always what Grove was experiencing. Sometimes Grove showed up to therapy not as Emma, but as Katina, a bubbly, confident femme with a don’t-fuck-with-me attitude. Other times, she showed up as Ed, what she calls her “guy mode” in the book, who was the person Emma had to be for much of her adult life as one workplace after another required her to present as a man in order to keep or find a job.

It’s no spoiler — the book’s description reveals this — to say that Grove began to understand that she had dissociative identity disorder, or DID, a complex condition in which a person dissociates so completely that their mind creates, and often walls off, one or more personalities (called alters) in order to function and be present during those dissociative episodes. Despite flourishing online communities raising awareness of the disorder, there’s still a lot of misunderstanding, misrepresentation, and doubt surrounding the condition.

Ahead of her book’s publication, Grove spoke with Them at length about writing from memory, DID, shame, and therapy.

The Third Person is such a powerful but also vulnerable book. Would you tell me about the process of writing about that six-month period of therapy sessions?

Emma Grove featured in them.

Emma Grove’s debut book, a graphic memoir titled The Third Person, is a profoundly moving and intimate portrayal of a ...

Grove’s debut memoir, a breezy affair even at close to 900 pages, dives into tangled questions of identity with clear-...

Each month, I provide Ms. readers with a list of new books being published by writers from historically excluded groups...